A Horse Called War were one of the heaviest aural assaults you could find in the late noughties UK scene; now, back in full swing after a half-decade hiatus, they’re as brutal as they ever were and are out to make sure you know it.

Formed in the grimy, East Anglian town of Thetford in 2005 by five mates just looking for good times playing together, A Horse Called War quickly became a force to be reckoned with in the then burgeoning UK sludge movement. Taking inspiration from their contemporaries - and icons of British heavy in their own right - Iron Monkey, Raging Speedhorn and Charger, among others, AHCW’s guttural expulsions of sludgecore menace are as low, dirty and forceful as even the early forebears of American sludge such as EyeHateGod and Weedeater.

The pure, unadulterated misery showcased on the one-two punch of releases from the band’s first era, the 2006 demo We Ain’t Proud of This and their 2007 EP Stumble at Every Hurdle, captures a raw expression of discontent that stands timeless; one delve into ‘Son and Heir of a Mongrel Bitch’ or the bookend to their first incarnation, ‘Bodil Joensen’, and you find yourself swallowing bitter pills of disdain coated in shells of distortion, low tones and snarling vocals.

Fast forward to 2015, when A Horse Called War re-emerged from the shadows, hungrier and more pissed off than ever, making up for lost time with flurry of UK shows proving they can still hang if you can still hang with them. Now slimmed down to a trim quartet and with their first outing in over ten years, the brutal Good for Glue (and Nothing Else) EP [APF023], out now, A Horse Called War marches onwards, as punishing to the soul as ever. And then some. 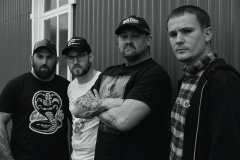 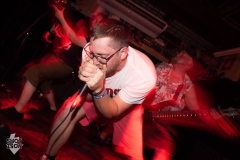 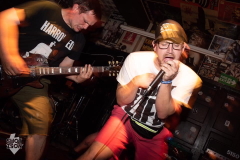 Good For Glue (And Nothing Else) 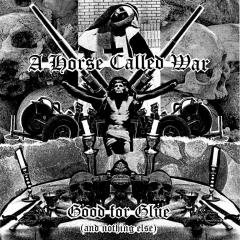