Since 2017, something has been lurking in the shadows around Merseyside, snarling from the unseen corners with a piercing horror-metal atmosphere; that something is Video Nasties, and they're ready to strike with their moral-panic inducing heaviness.

Comprised from members from some of Liverpool's finest heavy exports in The Bendal Interlude, SSS, Magpyes and Iron Witch, the quintet mix death metal with punky and thrashy undertones, creating something morbidly macabre and devilishly debauched.

With two single releases to their name prior to joining the ranks of APF - Halloween 2017's Transvoltum and 2018's Viva Deth (taken from their 2018 album demo) - Video Nasties set the scene with their own brand of grizzly black 'n' roll. A chunky instrumental section, complemented by the punishing tones of Damian Von Talbot on vocals, makes for a uniquely morbid vibe, hung on a background of grainy, retro-dread aesthetic. May 2019 saw them bring that chilling aura to Desertfest London, as they took over The Black Heart stage, playing a barnstorming set to a room packed out with victims of their blackened tones.

Video Nasties finally brought their reign of terror to APF Records when they unleashed their debut full-length Dominion [APF025] in March 2020. The album was met with universal critical acclaim and has gone on to be the label’s best-selling release.

In 2021 Video Nasties released new single Draw The Shades and played at Bloodstock Open Air Festival. They perform at Damnation festival in November, and tour the UK with Aggressive Perfector. Keep your eyes peeled for more news soon.

“Dominion is already on my shortlist for Best Metal Albums of 2020… you WILL dig Video Nasties. You will dig them six fuckin’ feet deep.” – Metal Sucks

“To paraphrase the iconic Phantasm tagline, If this one doesn’t thrill you, you’re already dead!” – Decibel Magazine

“If you're a fan of horror flicks, John Carpenter soundtracks, and everything-shredding death n' roll with black metal vocals, then you're going to love this. Seriously, it's a little unbelievable that a band is cranked up to 10 at all times like Video Nasties” – Metal Injection

“There are plenty of great hooks here…. all ten tracks are siphoned through a decaying death time machine before stumbling out the other side infused with the musical spirit of Entombed” – Zero Tolerance

“Phenomenal… I cannot find a fault at all with this album. Possibly one of the best debut albums I have heard in a very long time” – Metal Temple

“It’s raw, gritty and wonderfully enthralling. In a world where so many bands fail to come up with anything even resembling originality, Video Nasties break through with something fresh, new and vibrant. The break through act of 2020 is here and now” – The Razors Edge

“Dominion is a metal nightmare given sonic form and its complex beauty and brutal, forthright delivery are absolutely breath-taking” - Mass Movement

"Dominion is a brutal, vicious slab of death metal that rarely relents in its quest to smash your head in with a hammer” – Musipedia of Metal

“It’s the equivalent of having your face burned off like in Island Of Death or having flesh munched on ala The Living Dead At Manchester Morgue. You’ll scream, cry and beg for it to be over all while deep down loving every single second of the intensity” – gbhbl.com

“Would I recommend this album? You’re goddamned right I would. If you like your metal brutal yet melodic, you’ll dig Video Nasties and you’ll want to check out Dominion as soon as possible” – Tennessee Horror

“It’s a cool mix, like death metal thrash crossover, a simultaneously good and bad time, a sad party rager, or a mad night and the inevitable comedown happening both at once” – The Sleeping Shaman

“… it’s 40 minutes of raging, horror worshipping metal, and it’s as exciting as it is vicious” – Distorted Sound

“The ideal listening material for a night of whisky, eerie atmosphere and a severe lack of interest in a well-lit room” - Silentradio.co.uk

“Anything but nasty, Video Nasties serves up a hot, steaming dollop of death ‘n’ roll” – Defenders of the Faith Metal

“Dominion” is one hell of a debut album… Keep an eye out for this filthy five-piece, grab this album, catch them live, let them assert their dominion over you” - Ave Noctum 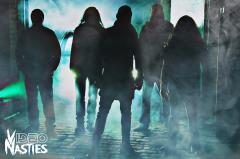 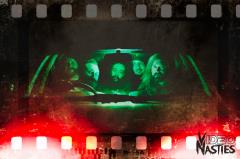 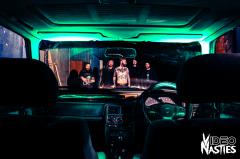 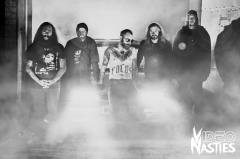 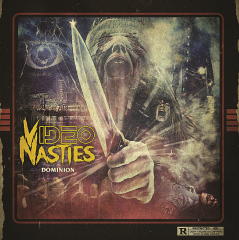